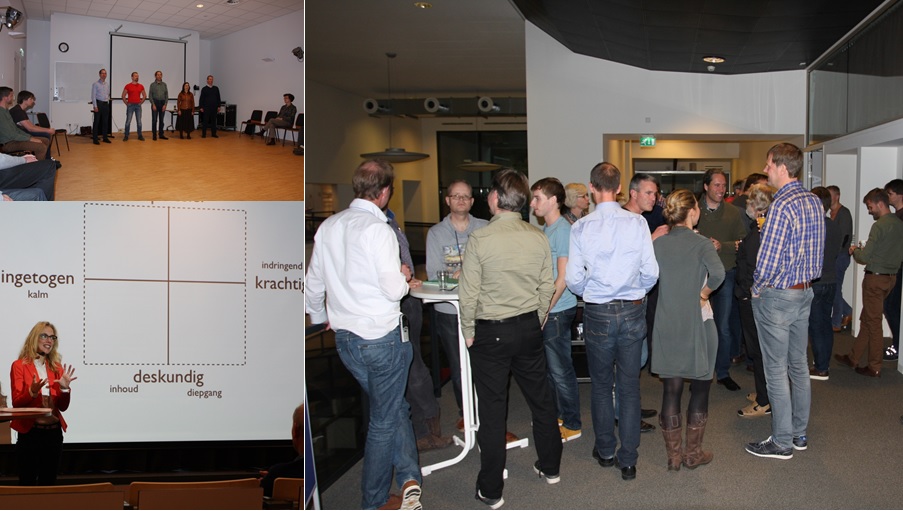 On 1 November the head of the R&D department, Gert Kruithof, organised an activity for the people from his department, which would be both "entertaining and educative".

So, in the afternoon everybody gathered in the auditorium and Gert introduced the speaker and instructor for the afternoon: Liselotte Hambeukers from Stemkunst. Liselotte is a speech therapist (logopedist) and she also studied professional classical singer at the conservatorium of Maastricht. To combine these two professions, she started her own company Stemkunst, which gives training in the use of the voice, in speech and in presenting. For this day the focus was on the voice.

Liselotte started her presentation by explaining that when people are talking with each other, only a small fraction (7%) of the communication is happening by means of words. About half of the communication is by attitude, expression and gestures, and the remaining 40% is on behalf of the voice. She explained that the way we are speaking, the sound and use of the voice and our accents, have a big impact on how other people assess us, especially if they do not see us. This was illustrated by some short movies. In a voice we can distinguish expressive versus thoroughness, and powerful versus subdued. Liselotte showed several examples after which we had to indicate where in the quadrant we would place this person.

After the break it was time for some more activity. The group was split into two parts and one group was instructed by Liselotte and the other group by her colleague, Berbke Hermans. At first we had to do some exercises to condition our body and voice. And then we got instruction on the use of our voice and our attitude. And, of course, this had to be practised.

Altogether, it was an interesting afternoon. And if you think that somebody is talking in a more authorative way than he or she used to do, or raises the hands to receive applause, like Sjouke Zwier did after his retirement speech, that is the result of this afternoon.

The very instructive and entertaining afternoon was finished with a tasteful (and tasty) Chinese buffet in the canteen.